Writing frustrations are about in my life.

The sheer stress and workload of my day job is consuming a portion of my life as expected. After moving, having to find a new place to live in a new state as well as learning a new job and new people and new responsibilities has interrupted my writing.

My tweeting is down.

My blogging is down.

And as a result, my stats have collapsed on twitter and wordpress. Additionally, my submissions to agents have stopped and my writing contest submissions have been impacted.

This is a difference than 3 months ago. I had a quasi-agent who had agreed to submit my stories, although on a conditional basis with a weird plan to submit to half the publishers, then get feedback, then to revise and submit to the other half. My blog was taking off. I had up to 800 views a day at a certain point. I was interacting with other writers. I had hired a freelance editor to proofread my completed manuscripts. I had submitted two short stories to writers of the future and a screenplay to The Blacklist. I was editing and curating the Midnight Traveler story collaboration with other writers. There was some minor cost to all of this, but generally, I was only out a couple hundred bucks, mostly through website hosting fees. I balanced all of this with my daily life and a full time job.

Then, I moved, while starting a small company on the side. This side business generated income so fast (up to $4k a month in gross sales) that I spent more time on that after my day job. The money was too good, especially after I moved. The art would have to wait.

My writing essentially stopped. I was making $0 from writing (maybe losing money and time). Some people I know in the new business make fun of writing in a way. They say Amazon publishing is dead. That was in maybe 7 years ago. The first mover advantage is gone. It is yet another industry where 1% get 90% of the income.

I don’t know. I have dreams. I want to do everything and don’t want to waste time.

Then my phone got destroyed by batteries plus and I lost 100 outlines to stories.

I could have given up. Why chase the writing dream?

For most people the answer is simple; because I enjoy it.

No. I fucking love it.

I was a weirdo who daydreamed stories in school instead of paying attention. I get bored watching movies knowing what will happen next. I get annoyed when things are dumbed down and exposition is there to spoon feed audiences. I read novels that are utter garbage. I get annoyed at big name authors who have every damn story ghostwritten for them because they don’t give a shit anymore about anything but the income stream. I get really annoyed at estates and publishers who pump out ghostwritten stories of dead authors.

I began writing again a few weeks ago. I had a few weeks to hit the quarter deadline for writers of the future. Out of the gates, I wrote a solid outline and wrote the first few thousand words like it was nothing. Then the story expanded. New characters were introduced until I reached a point a week ago that I admitted there was no way I could fit the entire story in 17,000 words. I spent a few days trying to deconstruct and simplify but it was all for naught.

The deadline was Friday night and I missed it. I spent Friday night playing XBOX and drinking Guiness because I deserve it.

I might have lost the battle, but I hope to win the war. I’ll keep my full time job. I keep my side business. I’ll be more efficient with my time and make a few hours for writing each week. Stories will get finished.

Deadlines will come and go; keep charging ahead and writing. Write for yourself. Write for your dreams. Write to bear your soul. Write to get famous. It doesn’t matter what your motivation is, just don’t quit. If you see other writers struggling on twitter, maybe spend a second away from spamming your self published kindle story and say hi to someone new. Share some trials and tribulations. They are not the competition. They are fellow writers with dreams like you.

So I’ll say it now. I’m new to twitter. I’ve been on it for 6 weeks and have tried to make connections through many ways. Sometimes I DM. Sometimes I respond to twitter feeds. Sometimes I post pictures. Sometimes I RT. Sometimes I post link backs to my blog. Recently, I’ve been trying to connect authors by writing an crowd sourcing story together. What I’ve learned is to try and be authentic and discuss your hobbies and most people are pretty cool. It’s actually pretty amazing how you meet new people and they have the same exact opinions as you on your favorite movie or book. This is the power of social media.

Because I write novels and am discovering the concept of “social platforms” I’ve scrolled through profiles and have been amazed of the followerships some people have. So far I keep my numbers near my followership max. I think twice I have gone through to try and manually unfollow some when I hit 5001 and can’t follow new people (damn that twitter ceiling). So I go through and check out who I can unfollow first. I scroll through and tap on the profile eggs first. This is usually 1 out of 25 or so. Then I tap on some that I don’t remember ever chatting with and see if they follow me. If not, I’ll unfollow to clear room for new contacts. I try not to be extreme about it. When I am at 5001 and I’ll go down to 4900 and this helps me make new contacts in the week ahead. What you see below is my profile. As you can tell, I’m a huge Big Trouble in Little China fan and when I created this website a couple weeks ago, my first blog was a plea to stop the attempted Reboot with The Rock. (Why? Why? Why? RT that blog if you agree)

I think this is pretty authentic. But then when I scroll through some profiles, I am amazed that some people I have never heard of have a crazy number of followers. You know, people that self report that they are amazon best sellers and that we are totally missing out in life if we don’t buy their book. To me, this is like when a new movie is about to be released and the movie studio puts out a press release that they are already working on a sequel (even though their own focus groups said the movie is crap). It comes down to false advertising. People  can be liars and scammers. Last Friday, I was scrolling through to see who I can make room for so that I can make new real connections and noticed this.

Yeah buddy, you don’t need to check your eyes. The great Marlon Brando has followed me 4 times with his many accounts. This could be some sort of artistic form of expression were his many different pictures represent a different part of his cognitive id, but I highly doubt it. These are clearly bots. I don’t know why they are following me, because I don’t resort to any antics. But that got me to thinking, who else has? Maybe some of these self published Amazon Bestselling authors who constantly pump out tweets on their own books are intentionally misleading people. I searched around google and found that there is actually a market for buying followers. What? Seriously? Evidently some other sites report this is standard practice in the celebrity game. Followers equate to legitimacy. (I currently have little with my few followers so far). What I found ironic is instabilify.com offers a “celebrity” package for $179 to get 40,000 followers. Wow. So for $5,000, any rapper or B list actor can look like they have a million fans (of profile eggs in reality).

This is too expensive you say? Your self published novel isn’t doing so great at 99 cents and you marketing budget is really tight? Well, buycheapfollowersfast.com has a deal for you! For only $40 you can get 5000 followers. What a steal!

I felt a little jaded reading about this. If I have to go the self-publishing route with my books, do I have to compete in the jungle with people like this? They represent themselves to be successful and popular to try and get some attention, when really it is a house of cards. I thought to myself, how bad is this? Is there a way to check my account for fake followers? Well, according to interesting folks at StatusPeople, you can. So I decided to examine my own account and see the results.

And then boom, just like that, here are my results. Yay. 1% fake, and 8% inactive. I guess that’s pretty good. DM me if you have a better looking account, because this looks pretty darn fresh.

Now you know where I’m going with this. with a couple free tries, I had the chance to search a few other accounts. So I chose a few … One was Jaxon Reed. I chose him because I was confused to how I’ve never heard of him, but he boasts 43K followers and only follows 6K people. He posts spam for his book a ton and doesn’t seem to talk to many people. He says he got picked as part of Kindle Scout, but I wonder what came first, the chicken (kindle scout) or the egg (profile eggs). 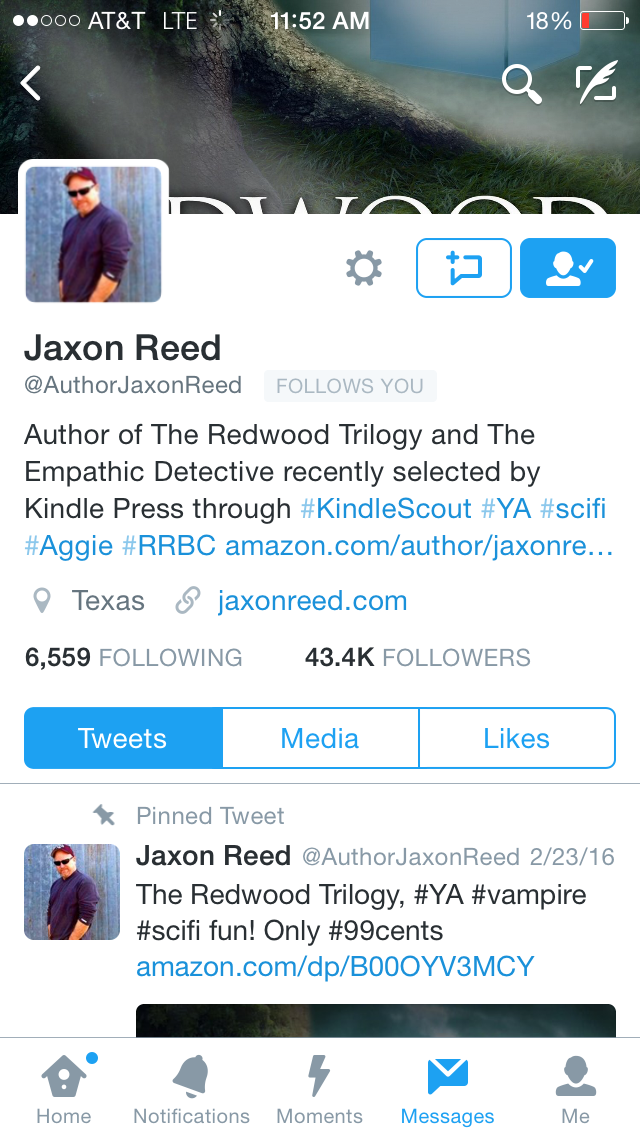 So what do the good programmers at Status People say?  I think this will be as eye opening for me as it is for you. Indie authors should rejoice around the world …

Yes, do the math. He actually has less than half the followers as me. I laughed at the ridiculousness of it all. Jaxon Reed is totally misrepresenting himself as a popular author (50K fans is enough to be a full time writer). He obviously has little integrity in how he represents himself.

I decided to do this again with a new author. Maybe you’ve seen him before on the #amwriting twitter feeds. Yes, the great Powers Molinar. What a powerful name. The power of his writing pen must be more powerful than Thor’s hammer.

So I did it again and entered in Power’s info on the app and boom, it revealed his stats. 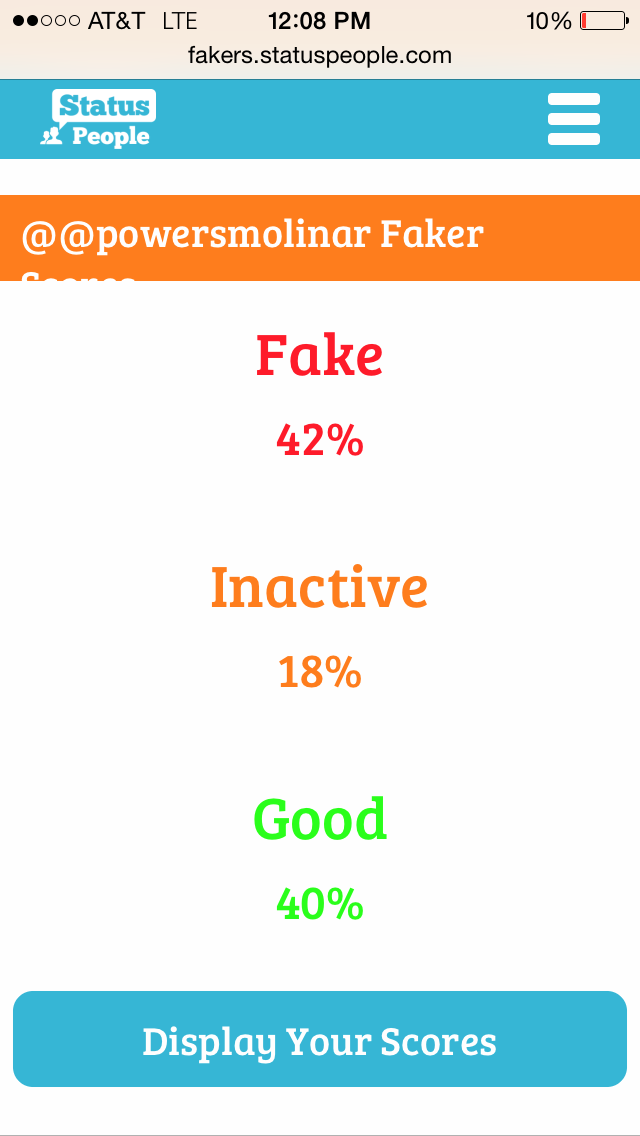 Not as bad as Jaxon Reed, but 42% is 23,772 fake followers. What the power of Power Molinar’s powerful marketing team did was to purchase followers so that he could follow more people over the cap (5001 per twitter),  in a hope of more follow backs. So for $179, Power’s inflated his follower stats and has followed a bunch of random people with a 50% response rate.

Be true to yourself and respect your audience. Tell the truth. Engage them. Chat with them. If your sales suck, say they suck. If they are awesome, quantify that. Showmanship is one thing for a movie release because first weekend box office receipts are a marketing gimmick, but being an author is a long term endeavor where your name is your brand. Don’t ruin it in a stunt like Jaxon Reed and Powers Molinar.

In the mean time, uh … RT this blog and follow me 🙂

NOW DISCOVER THE NEXT TWITTER SCAM OF OTHER BUSINESSES CHARGING FOR THEIR “INFLUENCE.”