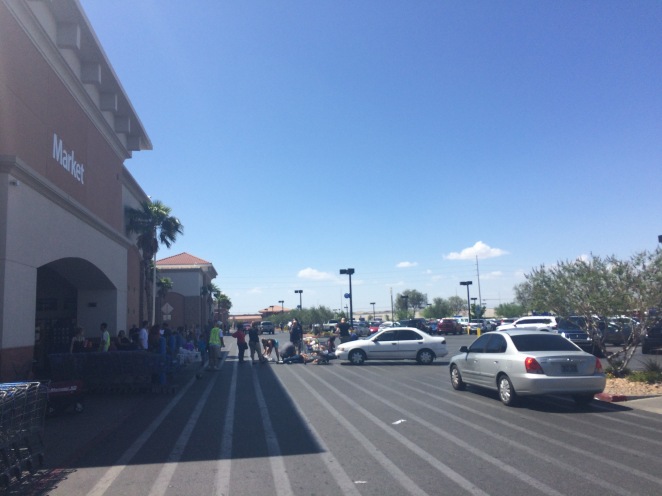 What happens in Vegas, stays in Vegas is the old adage. This is true when you are visiting America’s playpen. If you live in Vegas, this is where dreams go to die.

Today, as I was checking on some rental property stuff, I stopped by Walmart (America’s China shop) on the way back to the strip and saw an example of what locals go through.

Two people got run-the-fuck over in the Walmart parking lot. Groceries were everywhere on the street. The pedestrians were alive and well I believe, acting as if a train hit them in the ass instead of a beat up 1995 sedan going 5mph.

It was quite a site to see. The pedestrians, with no blood or any sign of impact were both on the pavement on their backs, breathing with their arms over their heads (did they confuse a car impact with fainting?) and some good Samaritans attempting to triage the disaster.

I know, call me an asshole for saying this was staged.

But riddle me this, why was this in front of a Walmart? And how did a sedan hit not one, but two people walking in an area where people look around? (What accurate aim?) And why did neither of them grab their leg where there would have been impact?

I walked by and took a picture because I have seen this many times before when I lived in Vegas. You see, there is a reason why pawnshops thrive here. I have seen some wierd stuff here and I’ll try to tell some stories as the week goes on.

People get desperate as hell here. They will do anything. Even this.

The driver of the car was desperately trying to take pictures of the scene and the acting going on, however in an ironic twist, the good Samaritans were threatening him to stop. It is hard to tell sometimes if the “do gooders” were in on it or not, or just new residents, but they were assholes to the driver, a man who was just probably trying to go to Walmart to score some 88 cent bread or a new OP t-shirt for $6.88.

Instead, he saw some acting.

I bought a new phone charger that I lost at the Venetian plus some Pringles and walked out and the police had arrived (like 15 of them) along with a firetruck. None of them looked concerned. The driver was calmly trying to explain his predicament and the officers were pretty friendly to him, more so than the Good Samaritans.

They see this all the time.