Voted as the best waterpark in the world, we needed to see where the action was on a hot summer weekend. I knew a little bit about the park, having been to the one in Galveston, TX a couple times, but this was the original.

Schlitterbahn started as a small motel on the bank of the Comal River in New Braunfels, TX. This is around 30 minutes from where I live in San Antonio. Since then, the park has expanded almost as fast as the population of San Antonio. Despite having competition from Splash Town USA, Aquatica at Sea World, and Six Flags Fiesta Texas, Schlitterbahn has remained the most popular water attraction.

Now I know why.

First off, the park is huge. The original park outgrew the available land, so a second west park was bought (a former campground of some sort), and built on. As a result, Schlitterbahn has a sort of small town feel, mixed with an old school Disneyland feel. The parking is free. The bus (1970 style with no windows) that moves you from one park to the next is free. The employees are seasonal and Texan, and kind of bring a chill vibe to the whole operation. Is there some complicated thumb print system to triple check if the person paid that day and only once? Nope. They just give you a wrist band and cut off the ends. They really don’t care that much. The colors rotate every so often, so I assume a few people have a collection of the rainbow of bands instead of just springing for a cheap season pass.

Full price admission is around $50. A season pass is a bit more, but not bad if you plan to go a few times, and a really good deal if you plan to go all summer. Online, there are a bunch of seasonal promotions the park does. I remember seeing one in South Padre Island where free food was included (during a 2 hour period). 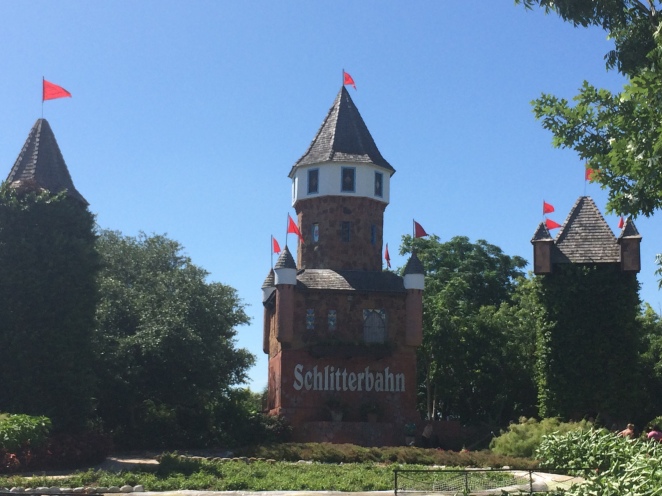 I guess this was the original tower. There are tubes chutes that swirl around it, but from the looks of the people, they seemed to enjoy the leisure stroll through, despite hundreds of people looking at them with their shirts off. If they were at the mall, they would be uptight as hell. At Schlitterbahn, nobody gives a shit. This is opposite mob theory, when everyone is chill and takes off their shirt, people are not as uptight to take off their clothes. 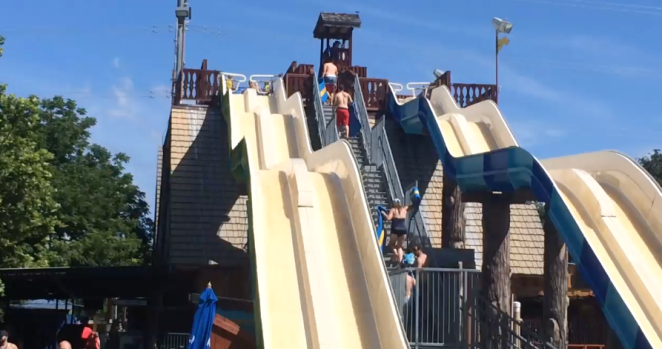 Here was some face first slide of some sort. You sit on your stomach on a mat and hold on for dear life. What? Does that sound like I was scared or something? The thing about sides is the bigger you are, the faster you go. I forget how many different slides I went down, but I swear I got air a number of times, especially one where I don’t even know what happens the last 2.5 seconds of the slide because my face is covered in water. 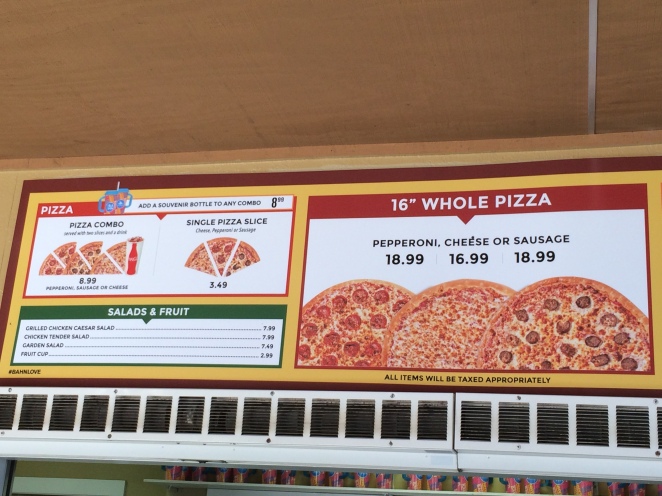 The place is fun despite it being about commerce. At the park, you are actually able to bring in your own food, unlike practically any other park who wants $10 for one slide of pizza. Do you want to haul in a 24 pack of water? Go ahead. The park staff doesn’t care. There are bag checks at the entrance, but they are mostly looking for contraband like a big ass bottle of Grey Goose. We figured why stress about it when we can just buy a pizza. $19 isn’t that bad compared to a pizzeria on the outside. 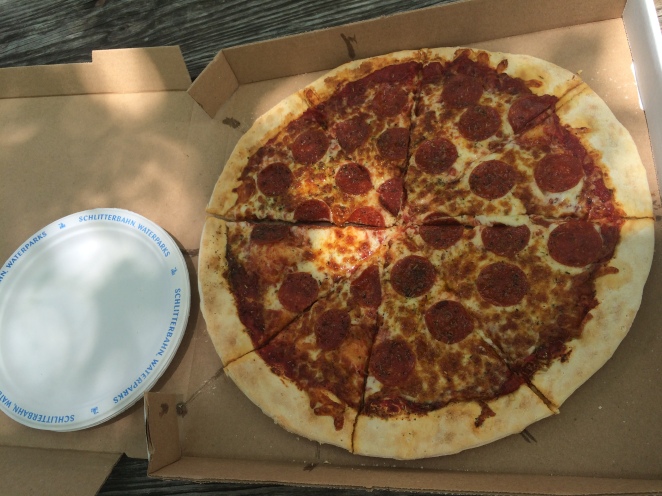 How was the pizza? I would rate it slightly above Chuck E Cheese pizza and slightly below Dominos pizza. Like with many things, when you have been out in the sun all day and are hungry as hell, this pizza was like an 10/10 (first slice) with diminishing returns on each subsequent slice. Why eat soggy sandwiches in the cooler when you can eat something hot? 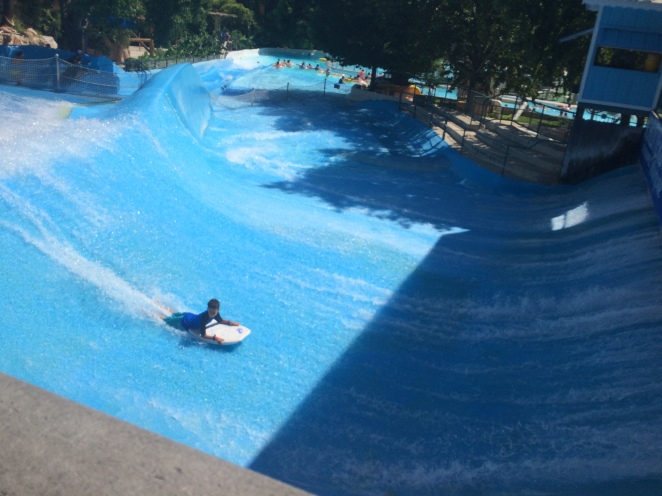 The attractions appeal to all demographics. Are you a young kid? There are kiddie parks and slow riders everywhere. Are you a little older and more adventurous? There is wake boarding and water slides and high angle chutes that might scare some travel bloggers. Someday, I’ll post the pathetic video of me on the Schlitterblast. It was short and tragic but had a brief moment of hope in there somewhere, I swear.

I don’t think I can look at other lazy rivers the same. Schlitterbahn literally has like 7 of them, ironic since Schlitterbahn is literally next to a river that people tube down in the summer. Why tube down a murky looking river when you can float in an artificial lazy river like this?

Overall, the place was fun. The cost wasn’t too much and the parking (like 30 yards from the gate) was much better than the half mile it takes to walk to Six Flags from your parking spot (after paying a crazy amount just to park) plus another 500 yards to get to the waterpark after passing through the gate (plus the return trip). The staff at Schlitterbahn was more relaxed. And most importantly, the attractions were not packed in with people. I swear, at Six Flags in the summer, I’m not even calling that tiny and narrow thing a lazy river, it is a “mosh-pit river.” The one in the picture above is like 4 times as wide, with an actual current.

Theme Park Rating: 10/10 Floating Alligators (you’ll understand the reference when you go there)