I discovered a few months ago the video game subculture of Super Mario speed running. If you search youtube, there are many champions of past and present showing replays of their great achievements.  According to the official site http://www.speedrun.com this the current record list. Behold the glory. If there was a Gamer Olympics, America would dominate the sport of Super Mario speed running. We hold 16 of the top 20 spots. 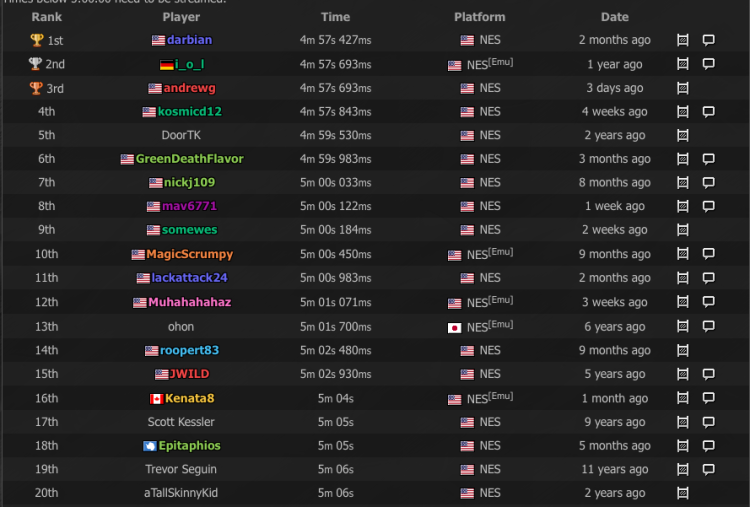 An interesting observation is that there seems to be a new breed of speed runners. The vast majority of the records have been set in the last few years. Can you imagine Trevor Sequin right now? He was king of the Super Mario world 11 years ago. He walked the walk, and strutted his stuff like he was about to get his own brand of hot sauce (that’s another story). Trevor reigned for 2 years until Scott Kessler beat him. I want to know this story. Did Trevor come out of retirement and start training to regain the record at this point? Or was he fine watching his title get smashed over and over? (Trevor, DM me on twitter and we can tell your story)

The current record holder is a player named darbian. Wow. What a time. You can watch his accomplishments on youtube. I don’t know how many hours it took to accomplish such a feet. I surely would like to know the training involved. People might not respect eSports at the moment, but I believe it is the future. The hand to eye coordination required and dexterity is something we might need when the Alien Invasion comes (i.e. Pixels, The Last Starfighter, etc).

As for me. I played Super Mario a ton. It was the first NES game I ever played (no, duh, right? It came in the system along with Duck Hunt). I never beat the game. I always got stuck at level 8-2. It would be the story of my adolescence. I took the crazy beanstalk adventures but never got the princess.

She was always in another castle.

WHY STREET FIGHTER 2 IS MY FAVORITE FIGHTING GAME EVER